Noir on the Net

Samantha is not alone.

Noir is in the zeitgeist, and you don’t have to be a detective to find it on the internet. Here are some of our favorite sites.

Sasha Jackson Mysteries. Author Jill Edmondson was one of the first mystery writers to show us some love, offering her P.I. Sasha Jackson as a big-sis-role-model for young gumshoe Samantha. Click here to link directly to Lisa’s guest blog post, and you can find out more about Sasha Jackson – “she’s a beautiful mess, but you should see the other guy” – here.

Eddie Vega and Noir Nation. Another early supporter of Samantha, Eddie Vega rounds up the best of noir on the web. Check out his coverage of the Samantha Spade Kickstarter, and check in with him regularly for the latest in net noir.

Sisters in Crime – women with crime fiction on the brain

All Mystery! enewsletter – a roundup of all that is new and great in mystery novels

Authors on the Air – the delightful Pam Stack gets to the nitty gritty with authors of all genres. Not strictly speaking a noir site, but we’re in favor of people who read books of any genre.

I’m sure there is someone out there who will give me an argument on this, but for my money, Raymond Chandler is the father of the hard-boiled detective genre. (Okay, along with Dashiell Hammett – more on him later.)

Chandler’s detective, Philip Marlowe (portrayed on the screen by Humphrey Bogart, of course), is tough as nails and soulful at the same time. Marlowe says things like, “I don’t mind your ritzing me or drinking your lunch out of a Scotch bottle. I don’t mind your showing me your legs. They’re swell legs and it’s a pleasure to make their aquaintance. I don’t mind if you don’t like my manners. They’re pretty bad. I grieve over them during the long winter evenings. But don’t waste your time trying to cross-examine me.” (The Big Sleep)

And he thinks things like, “She approached me with enough sex appeal to stampede a businessmen’s lunch and tilted her head to finger a stray, but not very stray, tendril of softly glowing hair. Her smile was tentative, but could be persuaded to be nice.” (More The Big Sleep)

And then again: “Ten blocks of that, winding down curved rain-swept streets, under the steady drip of trees, past lighted windows in big houses in ghostly enormous grounds, vague clusters of eaves and gables and lighted windows high on the hillside, remote and inaccessible, like witch houses in a forest.” (Also The Big Sleep)

It’s hard as a brick wall, and it’s poetry.

Marlowe always solves the case, sometimes he gets paid, and occasionally he even gets the girl–but usually the girl is much less innocent than she seems. And even if he loves her – if she’s guilty, you can count on Marlowe (just like Spade) to do the right thing.

My big sister turned me on to the Philip Marlowe books when I was still in middle school and I tore through the series like they were Harry Potter books. Probably Samantha has been sitting in my subconscious, waiting to be born, ever since then.

The Lady in the Lake

The films of Humphrey Bogart are a great intro to the world of film noir. Bogart’s iconic hard-boiled detective Sam Spade, in the classic The Maltese Falcon, set the bar for tough-talking good guys who can sling a quip or a fist with equal agility.

Sam Spade and The Maltese Falcon are, of course, our inspiration.

Other Humphrey Bogart films to check out:

To Have and Have Not (with the great Lauren Bacall, the toughest, coolest dame you’ll ever get a bead on)

Casablanca (co-starring the luminous Ingrid Bergman and re-uniting Bogart with the villains of The Maltese Falcon, Sidney Greenstreet and Peter Lorre) 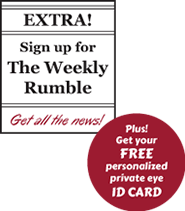